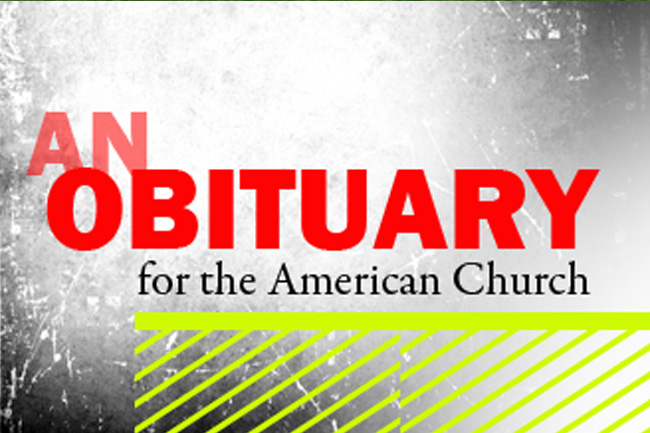 An Obituary for the American Church

From time to time, I will have the people I’m discipling write out their own spiritual obituary—how the enemy would take them out, rendering them unable to serve their family and communities. As you can imagine, the answers vary, but it always serves as a really helpful exercise as they are forced to confront issues of character, etc.

In a similar exercise, for the past year, I’ve been thinking how the enemy might be trying to take down the American church. What I’ve noticed is the original temptations Jesus faced (which can be boiled down to Appetite, Affirmation, and Ambition) are somehow warped and insinuated into every culture. A smart enemy would recognize the singularities of each culture and come at them in subtle ways, tempting people in ways they don’t see or expect and with things that would vary from culture to culture.

For instance, the issues the European church deals with are actually quite different than the ones the American church is dealing with…even though often times they are put under the same broad umbrella of “Western Church.” Sure, there are some similarities, but the attack is different. More nuanced.

Even so, those original temptations of Appetite, Affirmation, and Ambition are slowly insinuating themselves into everything we call Church. We just often don’t recognize it or see it.

And so this is how, if our enemy gets his way, the American church could be taken out:

• A culture of CELEBRITY (affirmation)

• A culture of CONSUMERISM (appetite)

• A culture of COMPETITION (ambition)

The idea of celebrity is deeply woven into American culture and values. All you have to do is look at the ridiculous nature of Reality TV and you see how Americans are constantly craving celebrity (either to be a celebrity or to find the next celebrity and stalk their every move). There is nothing dark or sinister about “celebrity” in and of itself. You can’t find an argument that says Jesus wasn’t a huge celebrity in his day. However, there is a difference between being famous and being significant. If Jesus was famous, it’s because he was doing something significant.

The problem with many pastors is they make decisions, develop personas, and define success from the lens of what will make them famous (even if they don’t know it or see that they are doing this). So in American church culture, it’s pretty easy to become a celebrity: Grow a huge church. Now all in all, it’s not terribly difficult to grow to be a giant church if you have the right tools at your disposal…but that doesn’t mean the ends justify the means of getting there. For instance, though Jesus was a celebrity in his day, he was willing to say things that ran people off in droves. In fact, the book of Mark chronicles (from about the mid-point of the book on) how people left Jesus to where, at the end, virtually no one was left. No one wanted to be associated with him for fear of the consequences. That’s not something you see too often in American churches.

Many subtle things happen in people who desire this kind of celebrity status: They can disengage community and isolate themselves, setting themselves up for moral failure. They can make decisions that are numbers-driven and not Kingdom-driven. They can skew to a shallow understanding of the Gospel as opposed to a holistic one that leads people to discipleship. They can put the good of their church (their personal Kingdom) over the good of God’s Kingdom.

Question: In what ways are your decisions made by a subtle undercurrent of ambition and a hope for celebrity?